Just months after Samsung officially announced the Galaxy S10 Lite, its successor has seemingly been spotted on Geekbench. A Samsung device with model number SM-G781B was listed on the benchmarking index yesterday. While it doesn’t specify the exact name of the device, recent reports suggest that the aforementioned model number belongs to the Galaxy S20 Lite ‘Fan Edition’. While the first four digits, G871, designate a particular variant of the phone, the ‘B’ at the end apparently signifies a specific region.

The listing reveals that the smartphone would ship with the ‘kona’ motherboard, which is codename for the Snapdragon 865 SoC. That is in line with the S10 Lite, which shipped with last year’s top-shelf Qualcomm chip, the Snapdragon 855. Meanwhile, the listed variant comes with 6GB of RAM. However, we expect more beefy hardware to be on offer with high-end models. 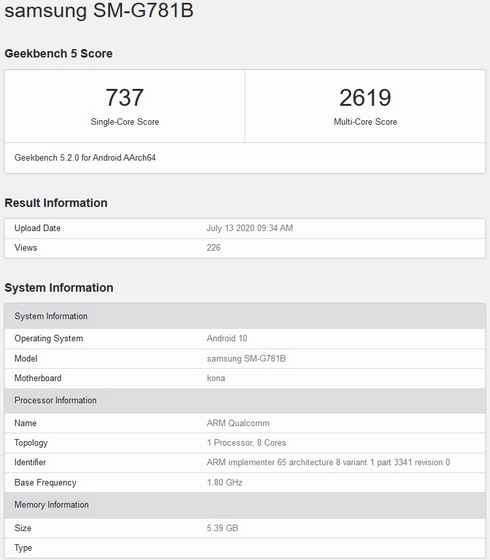 The listing also reveals that the device was running Android 10. We also believe that it will come with a layer of One UI 2.5 on top. As seen in the screenshot above, the device achieved a single-core score of 737 and a multi-core score of 2619. Both of those are in line with what you’d expect from the Snapdragon 865.

Either way, there’s no more info on the Galaxy S20 Lite just yet. However, we hope to get more details as we get close to its rumored launch in October. So are you excited about the Galaxy S20 Lite? Do you think it can offer stiff competition to the Chinese brands if priced well? Let us know in the comments down below.

Zoom was one of the first video conferencing services to really rise in popularity during the Coronavirus lockdown. The company saw a surge...
Read more
Technology News